Well my time in japan has come to an end, it was a long month, 850 miles along the coast from Tokyo to Fukuoka. It’s been an experience but it’s time to move on!… But the hell known as ‘golden week’ (equivalent of Japanese school holidays) has been foiling my every turn! Even now I’m in korea the hordes of Japanese holidaymakers are getting in my way… In every possible way! From fully booking out the ferry from Japan to Korea to fully booking EVERY BLOODY HOSTEL in both japan and the south coast of Korea! I’ve been lucky with accommodation, on one occasion after over hearing a woman screaming outside a hostel – about how she refused to pay for a room she wasn’t staying in… I managed to sweep in an hour later and take her bed hehe! And thank god I managed to wrangle a last minute spot on the ferry after two days trying!

The ferry was an experience, 6 hours with about a million children running around with parents already looking like they wished they’d just stayed at home, I took to hiding on the deck to prevent the stares of all the curious children and adults burning a hole into my cycling gear… Even though I must admit it looks odd to be kitted out without the bike with me! Not to fear, it was sat waiting on the other side, not a scratch, thank god! 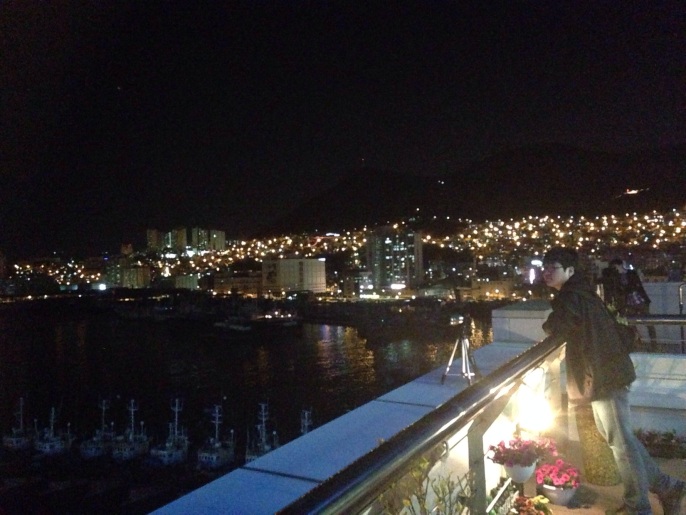 Busan was insane, full of tourists, the streets were still buzzing with life even at 11pm while I was desperately searching for a hostel. Unfortunately golden week had spilled over here too – I cant escape! On the verge of giving up and finding a nice bar to spend the night chilling in, some lovely women in a hostel took pity on me and let me sleep in the common room of their hostel! Bloody lucky! -even though not the best sleep I’ve ever had, waiting till 4am for everyone to finally go to their beds and trying to ignore the smell of the fish markets which covered the 6 floors below us!… Even if the view was fabulous.

Unfortunately my time in Korea is more rushed than I would of liked it to be and I’m pretty much just in a race to reach my ferry to Russia in time! So after a night in Busan it was onwards to Seoul! I managed to sneak my bike on the KTX ‘Koreans high speed rail system’… Ten minutes before set off I was found by a conductor who was scandalised and kept obviously saying “only folding bikes – this not allowed” but I decided ignorant foreigner was probably the best way forward so in reply to “only folding bikes” I’d
reply “take the wheels off? Oh okay!”. It didn’t take long until, a few minutes before departure she went “uh okay keep it on!” 1-0 to Amy!

Seoul is a lovely city, if I’m honest I think I probably prefer it to Tokyo. It has a very unique feel. The proximity to North Korea isn’t east to forget and I’m sure it’s the same for those that live here. The statue above is one of hundreds across Korea that hopes for a one day united Korea again. The story behind it is of a South Korean solider who saw his younger brother, who was fighting on the opposing side during the Korean conflicts, dropped his weapons and ran over to him. Seoul feels open and hopeful, for a metropolitan city it has managed to keep a very unique and Korean atmosphere. I imagine you could spend weeks here and never get bored but alas I’ve gotta be moving on!

I left Seoul by bus… Stowing my bike in the undercarriage while the driver was mobbed by an angry group of Koreans complaining that the bus was late! – he was very confused when he saw me taking it off at the other end, but I was just relieved Id made it in one piece!
After getting the bus across the north border I’m kind of relieved that I didn’t cycle it in the end… Turns out the north-east of Korea is a huge mountain range! Probably would of taken my slightly longer to cycle than planned!

Even in the small seaside town of Sokcho there was still no room at the inn. I tried every hostel but no joy. Finally I found a campsite on the beach and after persuading the bloke in charge that my tent was so small I would be able to find room on his already full site, he eventually came round to my way of thinking. He even let me stay for free! Perhaps since him and all the other Koreans had so much fun watching me having a one on one battle to keep my tent standing! Who needs a t.v eh!

Sokcho beach is gorgeous, one of the nicest I’ve been on. I can understand why Koreans flood here in the summer. I stayed up watching the fireworks which seemed to go on all night. Although Korean food isn’t really to my taste… The tanks stuffed to the brim with live sea creatures or stalls full of what looks like dried octopus or fried crabs, yea, not really my thing. Although I can tell you Korean cakes are lovely!!
But now it is onward to Russia and hopefully to the trans-siberian, provided all goes to plan. Part of me feels things are going to smoothly – hopefully my good luck won’t fade just yet!

One thought on “Goodbye japan! And briefly, hello korea!”